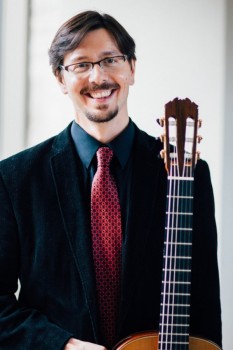 Stephen Mattingly has been warmly received by audiences as a soloist and founding member of the Tantalus Quartet. As recipient of the Theodore Presser Award, he recorded and published critical editions of the complete guitar chamber works by Franz Schubert. His first solo recording, Passages, was released on SoundSet Records in 2016.

Stephen enjoys a vibrant career as Associate Professor of Music at the University of Louisville, where he directs classical guitar studies. His students have won top prizes in international competitions and serve in teaching positions at high schools and colleges. He is a member of the Kentucky Arts Council Performing Arts Directory and has performed at Carnegie Hall, the Silesian Guitar Autumn in Poland, the Panamá Guitar Festival, the Tampere Festival in Finland, the Guitar Foundation of America Convention, and the Iserlohn Guitar Symposium in Germany, among others.

In addition to his performing and teaching engagements, Stephen is the Director of the University of Louisville Guitar Festival and Competition. Alongside this role, Stephen is the chairman of the Guitar Foundation of America Board of Trustees.