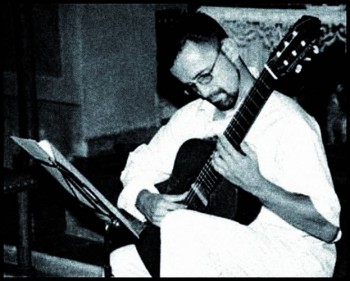 Zoran Krajisnik (1968) had his first guitar lessons in Sarajevo (Bosnia and Herzegovina). He graduated and got his masters degree at the Faculty of Music in Belgrade in the class of Vera Ogrizović. Krajisnik attended masterclasses with R. Aussel, C. Cotziolis, D. Russell, L. Ze and M. de Santi.

He was in the Soloist-class of professor L. Trier at the Royal Music Conservatory in Copenhagen, and was presented with a numerous awards at international competitions in ex-Yugoslavian republics and abroad.

Krajisnik performed recitals and symphonic orchestra concerts in the country and abroad. He made numerous recordings for TV and radio stations, and at the mere age of sixteen, he recorded his first solo record for Diskoton-Sarajevo.

He is a professor at the Academy of Music Arts in Novi Sad and Banja Luka. Since 2008 he has played duo with Alksandar Tasic, with whom he recorded CD Ben ritmato e deciso. In 2012 he became a Dean of The Academy of Arts at The University of Novi Sad.