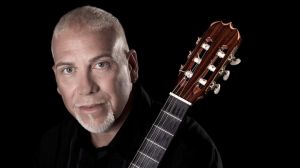 Roberto Fabbri has an extremely active career as a fine performer, composer, teacher and writer. He graduated from the Conservatory of Santa Cecilia in Rome in the class of Carlo Carfagna. He is the headmaster and a guitar professor at the Academy Novamusica&Arte in Rome and guitar professor at the Institute of High Artistic and Musical Formation Giulio Briccialdi in Terni. He is the artistic director of Fiuggi Guitar Festival and Rieti Guitar Festival. Roberto Fabbri has carried out an intense didactic and editorial activity, cooperating with different publishing houses (Anthropos, Berben, Playgame, EMR, Warner Bros, Carisch). He plays Ramirez 125° Anniversary 2007 n°1 and use La Bella strings.

Roberto Fabbri - Inside me