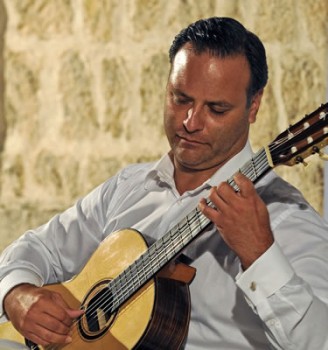 Zoran Anić (1973) was born in Belgrade, where rated as a great young talent, he started his musical education (guitar) and just after a few months had his first public performance and recording for National Radio.

He finished postgraduate studies at the Faculty of Music Art in Belgrade, where he started PhD program as well. In addition to his regular studies, Anic took master classes with the world famous guitarists such as: Alirio Diaz, Alexandre Lagoya, Dusan Bogdanovic, Roland Dyens, Costas Cotsiolis, Hubert Käppel and others. He was the winner of numerous national and international competitions. Previously called as a young talent, and later as a mature musician of virtuosic and inspired interpratations, Anic has played numerous acclaimed solo concerts in Serbia and abroad (Italy, France, Spain, Austria, USA, Poland, Greece, Hungary, Slovenia, Bulgaria, Montenegro, Bosnia & Herzegovina...).

In addition to his rich solo career, he also had successful performances with chamber orchestras and leading symphonic orchestras. Besides classical music, Anic has played alternative music as well. He recorded a great number of audio and video records. He is a Professor at Music scholl Vuckovic in Belgrade and an active teacher and a jury member at many international competitions and festivals.