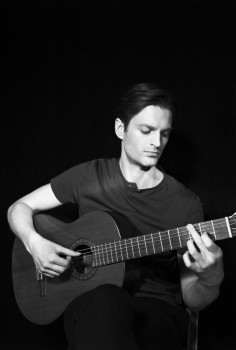 Since graduating from the University of Surrey where he gained both his undergraduate and masters degree, Guy Traviss has led an active career as a performer, teacher, journalist and musicologist.

As a performer, Guy has worked with Sir Peter Maxwell Davies on his work for solo guitar, Hill Runes, which he performed in an event honouring the composer’s 75th birthday. He has also studied with the Welsh composer Stephen Goss, working with him on his Sonata for Guitar. Guy regularly works at international musical festivals and adjudicates at competition throughout Europe.

He is currently Features Editor of Classical Guitar Magazine and is an editor for the International Guitar Foundation, based at London’s Kings Place. In October 2013, Guy will begin a PhD programme with a thesis centred on the music of Nick Drake.