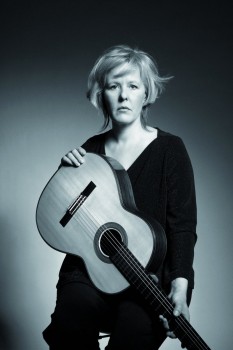 Vera Ogrizovic has finished her secondary music education in Belgrade  (Serbia) with the prof. Nadezda Kondic and in Paris – where she received her bachelor's and MA degrees at the Ecole Normale de Musique de Paris, with Rafael Andia. She is the laureate of the International guitar competition in Carpentras (France) in 1986. She was a teacher at the Conservatoire Européen Supérieur in Paris from 1986 until 1988. Since 1989 she has been the professor at the Faculty of Music Art in Belgrade. She has performed at prestigious festivals in Serbia (BEMUS, BELEF, NOMUS, NIMUS,  International Composers’ revue, Guitar Art…) as well as in Slovenia, Bosnia and Herzegovina, Montenegro and France, Greece, Finland and Switzerland. She is the author of the book “Guitar – History – Literature – Teaching“ (2000), as well as two collections of compositions for the beginners – “My first concert“ and “Play Bach“ (1996). In 2005 she published a CD – “Contemporary Serbian guitar music“.

She played with the string orchestras “Dusan Skovran”, “Saint George” (Sv. Djordje), with the Symphonic and Philharmonic orchestras of Belgrade, with the New Music Ensemble and the ensemble “Camerata Serbica”, as well as with the conductors Aleksandar Pavlovic, Petar Ivanovic, Bojan Sudjic, Darinka Matic – Marovic, Biljana Radovanovic, Premil Petrovic… She plays with the flutist Ljubisa Jovanovic, with the composer and a guitarist Dusan Bogdanovic, with the lutenist and guitarist Edin Karamazov…

Vera Ogrizovic raised a number of young performers and teachers in Serbia, Macedonia and Montenegro. She has started and taught the guitar classes as the visiting professor at the Music academy in Skopje (Macedonia) and Cetinje (Montenegro) from 1995 until 2006.  She holds master classes and seminars in Serbia and all over Europe, addressing the issues related to the playing technique, styles, concentration and interpretation. For her teaching results, she has been awarded a Great Silver Plaque of the Art University in Belgrade.

Ljubisa Jovanovic and Vera Ogrizovic play together since 1995; they cultivate the original approach to the usual repertoire for this ensemble, they transcribe new pieces, and perform new pieces by contemporary authors. They have played all over Serbia and Montenegro – at the significant festivals, on the radio and television.