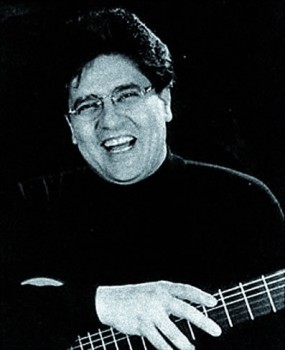 Costas Cotsiolis is nowdays considered as one of the greatest guitarists of our time.

He is an Art Director of Naxos Internatioal Guitar Festival and Guitar Art Festival.

Since 1977 he’s been a Professor at the Conservatory of Athens and since 1981 at the New Conservatory of Thessaloniki as well, creating an exemplary scholl of excellent guitarists who have been awarded all over the world and have made international careers.

For his activities, Costas Cotsiolis was awarded by the Academy of Sience and Arts of Greece. In 1987 he published his book for guitar technique The Virtuose Guitarist. Since 2008 he’s been a Professor at the University of Indianapolis, Athens Campus and since 2009 at the State Conservarory of Thessaloniki as well.

As a solist, he played with the most prominent orchestras and in the most prestigious concert halls worldwide.

He collaborated with numerous famous artists of our time and many composers dedicated their works to him. He was invited to numerous festivals in the world and gave masterclasses at the most prestigious academies and universities.

"Costas Cotsiolis is one of the best performers of my music, probably the best. But also hear him in Barrios, de Falla, or Ginastera. Virtuoso playing or sensibility, all in one."

"Costas Cotsiolis is one of the greatest guitarists of our time. Besides being higly acclaimed as a top performer he has established major artistic achievements over the course of three decades of international carreer."