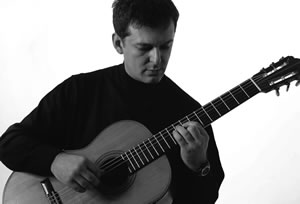 Aleksandar Hadzi-Djordjevic graduated from the Academy of Music in Prague in the class of Štěpán Rak and Martin Mysliveček.

His main field of interest and work is pedagogy. For many years he had been working as a guitar teacher at Josip Slavenski Music School and in recent years has been employed in the Music School Lisinski.

During 1990, he worked as a Professor at the Faculty of Music. From 1994 to 1996 he taught guitar at the European Conservatory of Music in Cyprus. Many of his students won international awards and now are performing actively. He was awarded with the recognition of the Association of Music and Ballet Schools of Serbia for his educational activities, as well as with the prize of the City of Belgrade.

He often participates at international guitar seminars and competitions as a lecturer and a jury member. He performed successfully as a soloist and in a duo with Srdjan Tosic.