Vlatko Stefanovski on 3rd June at the Guitar Art Festival

The celebrated guitarist Vlatko Stefanovski is a regular guest and part of the Guitar Art Festival. This time, at the concert on June 3rd in the Main hall of the Belgrade Youth Center, he will be joined by a special guest, Vukašin Marković, a singer and trombonist, with whom he will perform popular guitar songs in special arrangements. Tickets are on sale through the Tickets.rs sales network at a price of 2.000,00 dinars. 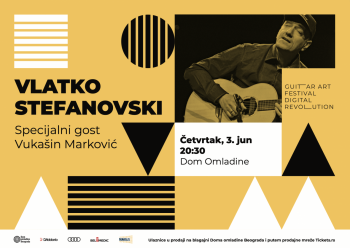 The well-known Macedonian guitarist Vlatko Stefanovski started playing the guitar at the age of 13. He founded the group "Leb i sol", which became one of the most popular on the scene of the former Yugoslavia, with 13 albums released. Stefanovski already gained the status of a cult guitarist and was on tours around the world. In the years that followed, Stefanovski made a very successful solo career.

Vlatko Stefanovski, as one of the greatest guitar virtuosos of this area, is recognizable for his special style of fusion of musical styles, Macedonian traditional asymmetrical rhythms and modern rock. In his rich career, he can boast of many successful collaborations with great world and domestic musicians.

Since 1998, he has been collaborating with guitarist Miroslav Tadić, with whom he has released the albums "Krushevo" and "Live in Belgrade", and he is also known to the Guitar Art audience from the great guitar project "Kings of Strings", where he collaborated with Tommy Emmanuel and Stochelo Rosenberg.