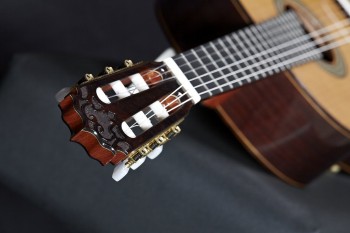 The world premiere of the concert "Recuerdos de Belgrado" on the XXI Guitar Art Festival will be performed on the Alhambra guitars! All four soloists - JOAQUIN CLERCH, MARCO TAMAYO, RAFAEL AGUIRRE, and DAVID MARTINEZ will play a concert on Alhambra guitars.

In the early 1960s, Francisco Martínez Clavel suggested to his business partners Ricardo Llorens and José María Vilaplana Vilaplana, who ran a little carpentry shop, that they make a prototype of a classical Spanish guitar.

The prototype was revised and refined with the help of local music teachers.

Upon seeing the successful results of their initial efforts, they decided to launch a project for making guitars. To this end they founded a company called "Manufacturas Jachi", established as a partnership by Francisco Martínez Clavel, José María Vilaplana Vilaplana, Ricardo Llorens Bonhome and his brother-in-law José Luis.

They quickly found themselves running out of space and decided to move to new premises in an unnumbered building on Cela Street in the town of Muro de Alcoy, where they soon employed a staff of about 20.

Due to a variety of circumstances and personal developments, José Botella Miró contacted Manufacturas Jachi and offered them his services as a commercial agent, with a view toward him handling all domestic and international sales efforts.

After a few years, Mr. Martínez Clavel decided to sell his shares and leave the company. From this time José Botella Miró and Rafael Insa Satorre came to an agreement with Mr. Martínez Clavel to continue with the project after a trial period of six months.

Throughout the intervening years and to this day, Alhambra has continued to make inroads into the domestic and international markets for stringed musical instruments, and has made a constant effort to improve and excel in their chosen field.

Since its inception, Alhambra has continually made classical guitars with the traditional Spanish heel, always using only the finest wood of various types.

In the final analysis, it is the company's people that make it what it is. Many of the young men who started working in that little workshop spent their entire careers there, and have since retired, having invested all their lives and talent in the company. Others are still working in the same company where they began their careers. This team, and the experience they have gained over the years, are of inestimable value to Alhambra.