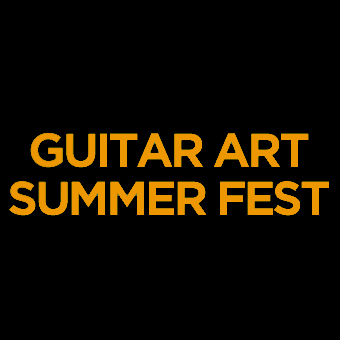 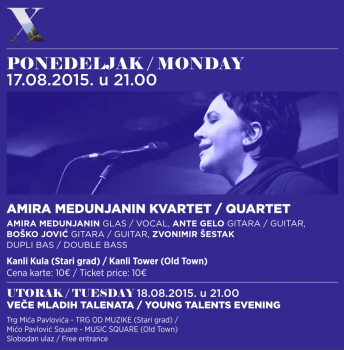 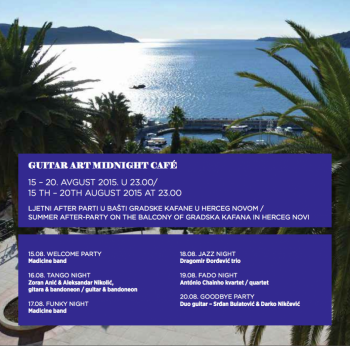 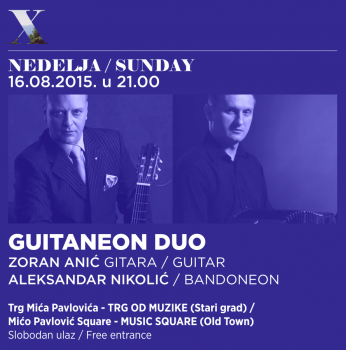 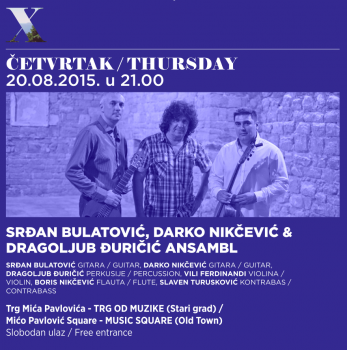 GUITAR ART SUMMER FEST - DECADES in Herceg Novi, represents a place and a concept that the guitar has taken on the steps of history. For ten years, the guitar sounds have been echoing through stone, rising and falling for the 100 001st times. The now renowned guitar sound is echoing through the streets of the old town and forcing our narrow, steep streets to it. It is no longer a secret. It is a tradition that begins at dusk, when the lanterns are slowly lighting up in the Marka Cara’s street. Then the familiar footsteps start to echo through the old town, and at the same time the sound of brass starts to spread. This creates a symphony prior to the concert evening, which enchants random passers-by and intentional experienced travelers. Thus, residents of Herceg Novi are create their own distinctive music with their steps, making each step a tone, intonation and a signal for the start of the concert. By tacit agreement and birth right, each one has its place. They have been building it over the last ten years. This place was not given to them, because the festival is not someone’s, but theirs. Any respected individual, who is a part of the audience of this romantic coastal and above all a guitar festival, has been a part of the creation of this place for the last ten years. They come together and stand proudly as hosts of the evening, letting the waves of guitar sounds to haunt the city walls once again. That is not surprising. Herceg Novi has always been and will remain the center and an inspiration to artists. After decades of the festival, guitarists from all around the world know about the city of art in Boka Bay. Many stories have been told about the audience that closely monitors every tone, gratefully applauds for every musical masterpiece and proudly welcomes artists to whom it provides immeasurable inspiration. In that way, the Guitar Art Summer Fest has become a secret link between the guitarists and people of Herceg Novi.

HERCEG NOVI THE CITY OF FLOWERS AND MAGICAL GUITAR

"The youngest town on the Adriatic coast, Herceg Novi, located at the entrance to one of the most beautiful bays in the world, officially is the city of arts and festivals. They start in February during the Mimosa holiday which will soon be celebrating half a century of its existance, by the end of September. Guitar art among them is privileged, since its debut in 2006.That is maybe because he had boldly revived the market in the Old Town, Kanli tower, Bellavista, a period when the season starts to end  from 15th to 21st of August. Maybe because its a initiators and founders, first of all the director Bosko Radojkovic and then Herceg Novi Municipality, Tourist Organization, IAU Herceg fest, except professionalism of the festival, had entered a lot of love, energy and desire it to be successful as a professional event that gathers classical guitarists of all profiles, students of primary and secondary schools, their professors and eminent guests and also the world's leading guitarists. Perhaps due to the exchange of knowledge, practice and experience, meeting the audience with domestic and international trends of modern guitar concert practice ... and maybe just because of magical guitar sounds in Herceg Novi during the festival heard under the clear, starred sky, tucked squares in the old town and the Kanli tower's prettiest summer, open-air stage on the Adriatic. Perhaps it is because of the magic that GASF makes,the magic that equally entices audiences, participants and organizers - this we do not need to explain. We just need to encourage and support that combined energy of festival director Bosko Radojkovic and his associates make in Herceg Novi, Belgrade, Podgorica, across Europe ...

Thus, the Guitar Art Summer Fest in Novi as well as Guitar art fest in Belgrade remain manifestations that re not to be missed by any chance, and concerts organized on them will always be among those who are remembered forever."

Summer after - party on the balcony of Gradska Kafana Herceg Novi

HOW TO APPLY, RULES, ACCOMMODATION:

2.  For registration, the candidates are obligated to:

The application should be sent by e-mail to: info@gaf.rs

- 3 individual classes in duration of 40 minutes

- Performance on the Closing ceremony

- Passive presence during all other classes

- Set of tickets for all the concerts – 6 evenings

- Passive presence  during all individual classes

- Set of tickets for all the concerts – 6 evenings

4. Payment of the second installment of the registration fee should be made in cash to Guitar Art Summer Fest  desk when applying and getting all materials and program information on the first day of the festival (August 15, 2015, 10 – 12 AM , Music shool in Herceg Novi, Old Town).

5. In case of cancellation by the candidate, the registration fee cannot be reimbursed.

6. The participants bear the travel and accommodation expenses in Herceg Novi.

7. There is a full accommodation offer for the participants as well as for the guests / parents in price 150 € (more information on the first day when applying): Meals – 6 days: breakfast, lunch, dinner in the Guitar Art Summer Fest restaurant; Accommodation  – 6 nights: taxes included, duble and triple bedrooms in private accommodation in the area of Old town.

8.  The offers could be used separately ( only accommodation or only meals) or the participants can organize everything themselves.

10. Organized excursion around Boka to Kotor

11. The festival is subject to change.